You are here: Home / Mapping

The Systems Approach to Regional Climate Change Adaptation Strategies in Metropolises project developed and tested an integrated, systems approach to assisting the 15 SCCG Member Councils in assessing their vulnerability to climate change and the barriers and opportunities associated with adaptation at the Local Government scale. The project also seeked to demonstrate the value of coordinated regional-scale responses to climate vulnerability through Local Government cooperation. The SCCG partnered with CSIRO’s Climate Adaptation Flagship and working in collaboration with the University of the Sunshine Coast, as part of the Australian Government Department of Climate Change (DCC) National Climate Change Adaptation Program.

The aim of the project is to develop and trial a method for a systems approach to regional climate change adaptation strategies in large urban areas through: 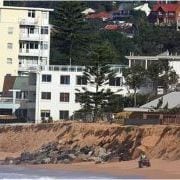 Given that it is impossible to stop climate change impacts and resultant sea level increases and more intense significant storm events, Local, State and Federal authorities are faced with the need to consider key areas at immediate to medium threat. This information needs to then be applied to planning mechanisms and management strategies to cope with future impacts of increased coastal inundation and erosion directly impacting existing, redeveloped and new development within their coastal landscape areas. 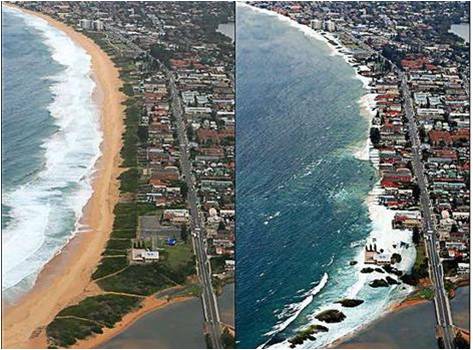 This project maps areas of risk, utilising sophisticated modeling together with Councils own information sources Inundation(eg LiDAR technology) to determine risk and develop consistent model planning and management responses in consultation with relevant state government agencies and the broader community.

The SCCG engaged the Environmental Defender’s Office NSW (EDO) to conduct a comparative assessment of:

The results of this analysis are presented in the report prepared by the EDO, a copy of which can be downloaded by clicking on the following link:

For the Stage Outcome Reports, please click on the report titles below. 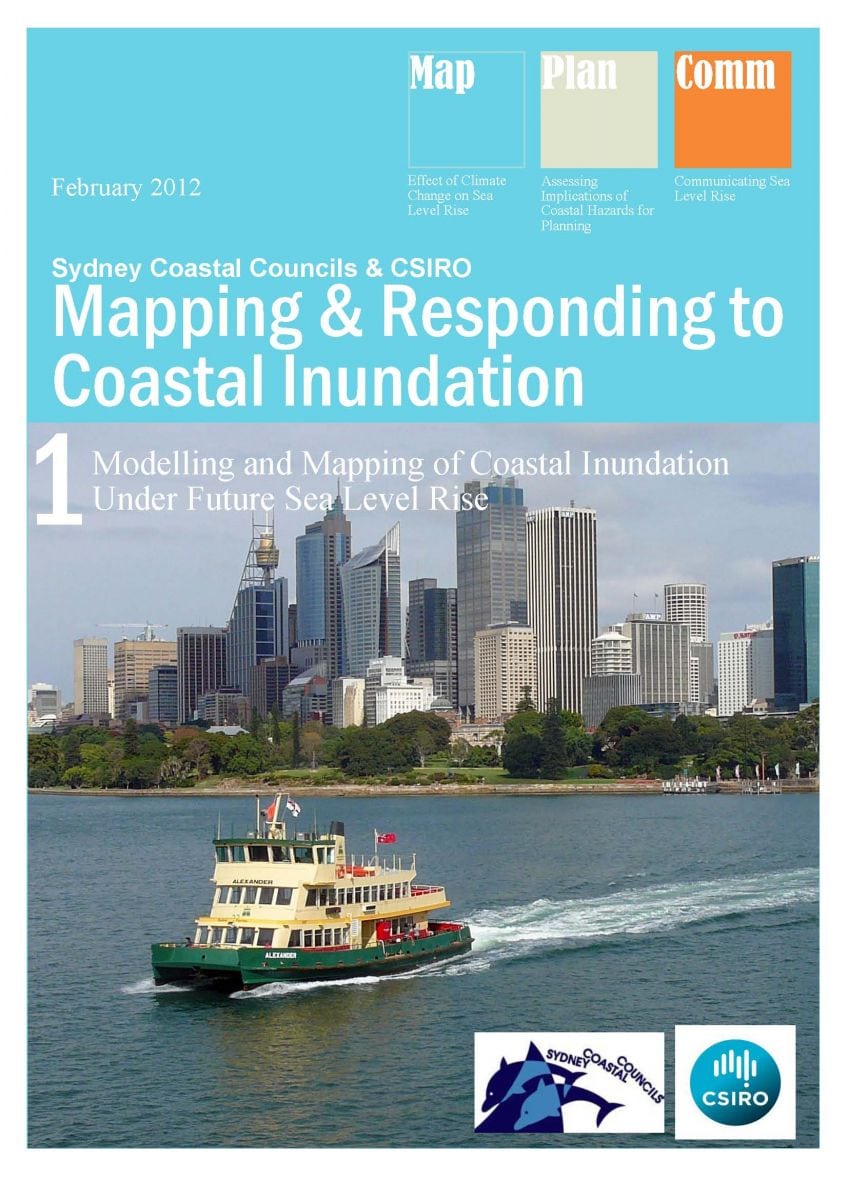 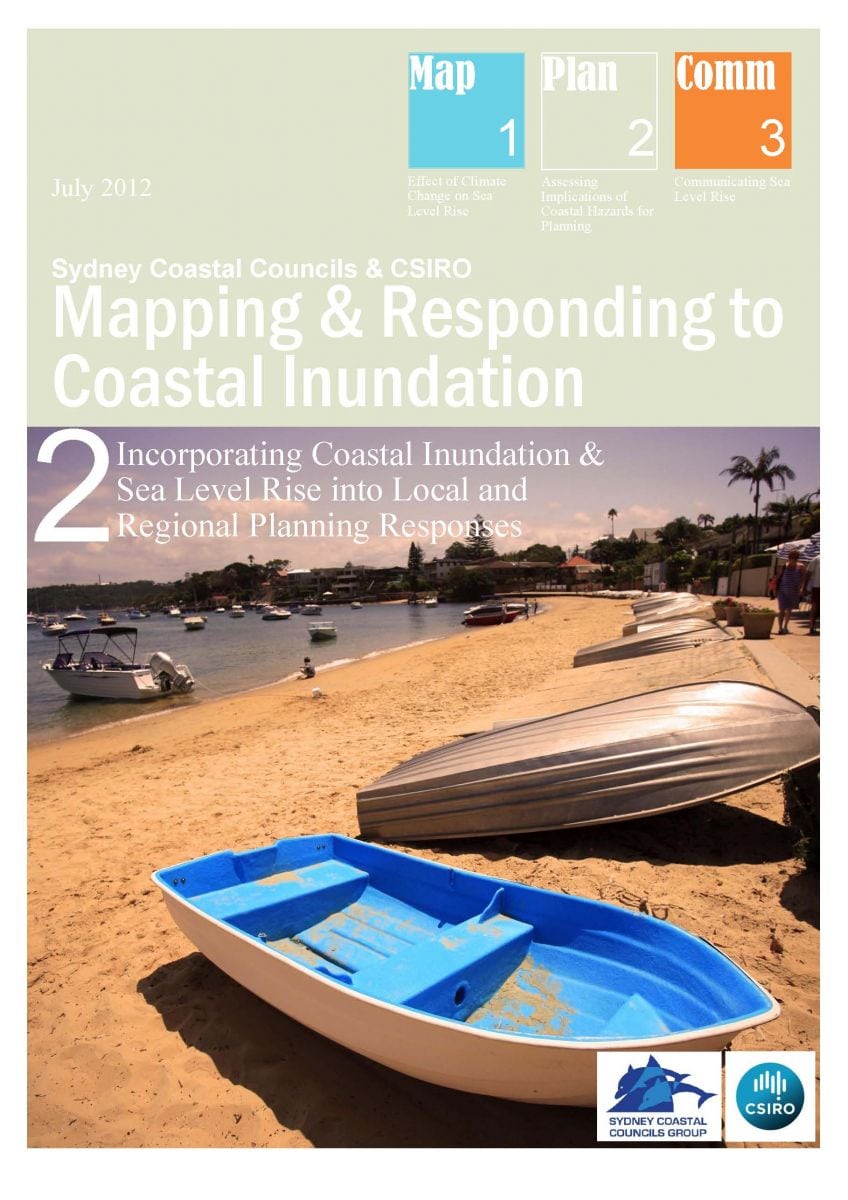 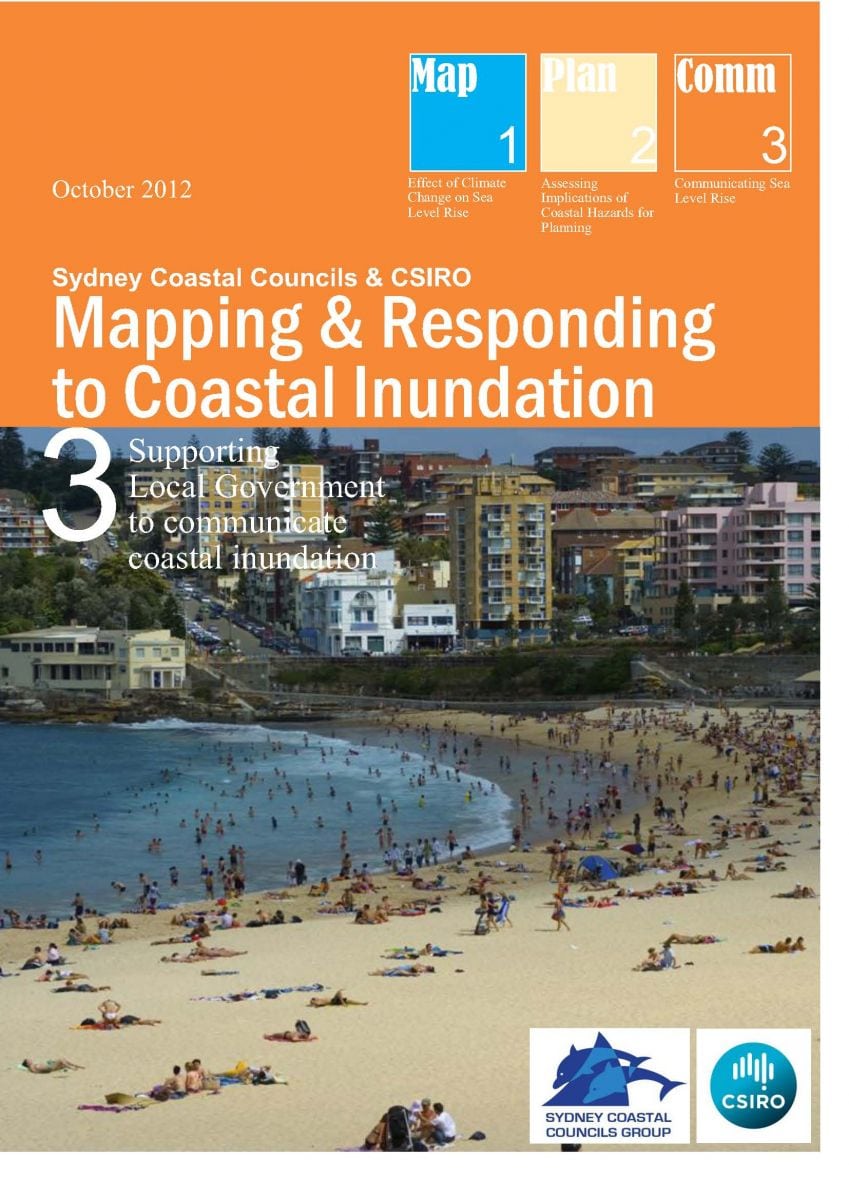 This project was launched to assisted attendees to understand project outcomes and outputs to take back to their own organisations for use.

There was a Panel Discussion with the key speakers of the day. This allowed attendees to ask questions about the project outputs and the NSW 2012 Stage One Coastal Reforms.

The launch also involved the establishment of a secure and temporary FTP server to provide Member Council access to the project outputs including all mapping information, stage outcome reports and associated meta date information. 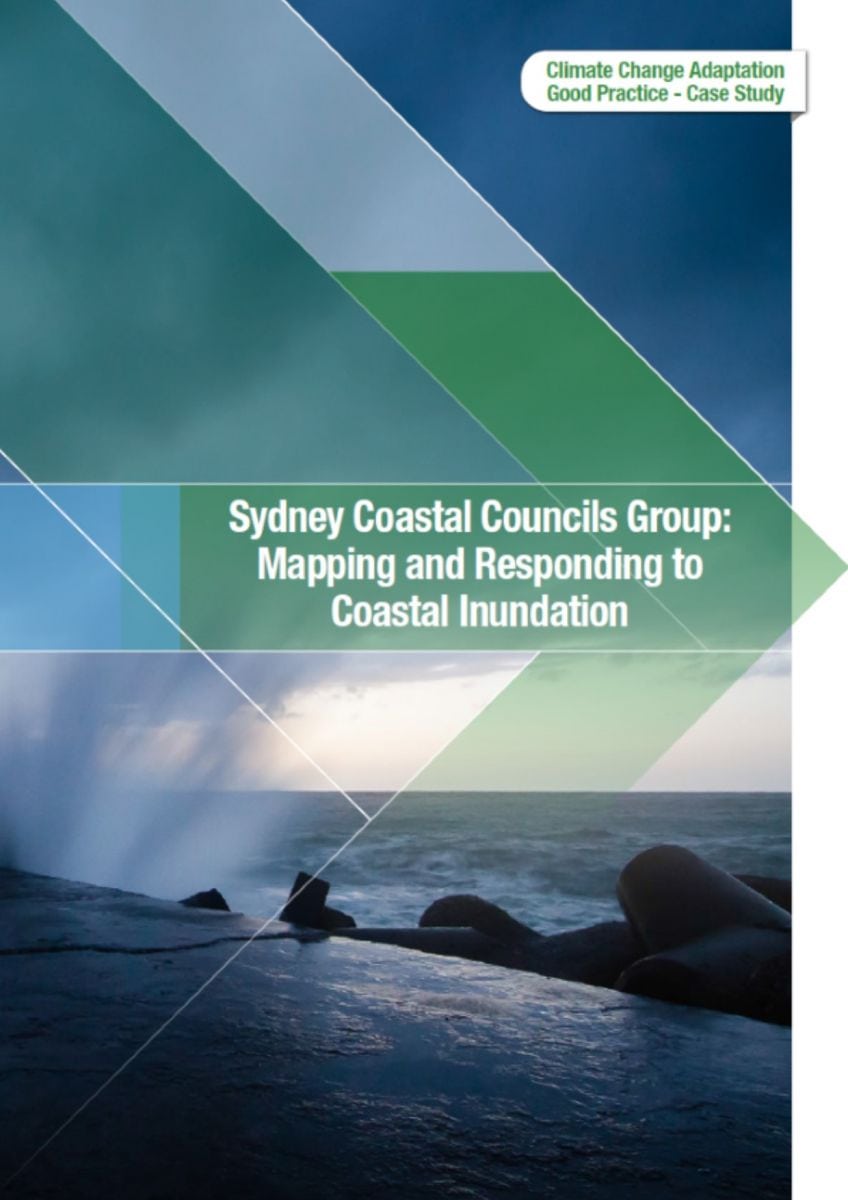 Sydney’s coastline represents one of the most beautiful and environmentally diverse attractions in the world. It features cliffs, beaches and inlets of magnificent beauty unique to the region. Outlined in the brochures produced through the Walking Coastal Sydney project is a continuous walking track that residents and visitors can utilise to explore the beautiful coastline of Sydney.

The aim of the Walking Coastal Sydney project is to promote public access to, and enhance the appreciation and recreational enjoyment of Sydney’s coastline and estuaries for the people of Sydney and visitors to the city. Walking Coastal Sydney was a partnership project between the Sydney Coastal Councils Group, the Walking Volunteers Inc. and Department of Planning, with funding received through the Sharing Sydney Harbour Access Program.

Through the project a series of brochures/walking maps that combine to provide a mapped and walkable route from Pittwater in the north to Sutherland in the south and linking with existing coastal walks have been produced.

Updated Walking Maps are available to download at this link.

Note: this link can also be used to download the maps to your smart phone or tablet.

For Android phone to navigate, please follow instructions below:

Brochures for the mapped walks as part of Walking Coastal Sydney are provided below.

This brochure covers the coastal route from Barrenjoey Headland at Palm Beach to Narrabeen Lakes on Sydney’s Northern Beaches. At its northern end, it is a starting or terminal point for the network of walks, while at its southern end it connects with the Narrabeen Lakes to Manly Lagoon walk.

This walk begins with the coastal and Pittwater panorama from historic Barrenjoey Lighthouse, passes through Palm and Whale Beaches following a series of rugged natural headlands with extensive views interspersed with sweeping and secluded beaches, before reaching coastal dunes and wetlands feeding into Narrabeen Lagoon.

This is a splendid coastal walk featuring long, sweeping beaches, separated by several headlands with extensive views, including Long Reef Point with its aquatic reserve. The entrances of four lagoons with their wetland areas are also crossed.

This magnificent walk features the famous Manly Beach, Shelly Beach, Sydney Harbour National Park, the former School of Artillery, North Head Sanctuary, and North Head which dominates the entrance to Sydney Harbour and offers extraordinary views down-harbour. It passes the former Quarantine station and Manly Cove before returning to Manly wharf to set out on the popular Manly Scenic Walkway.

This iconic walk circles North Harbour before climbing though the outstanding scenery of another section of Sydney Harbour National Park which overlooks the Heads, Crater Cove and Grotto Point Light. It then drops into popular Clontarf Beach and a final bush track to the Spit bridge. At its northern end the walk connects with the Narrabeen Lakes to Manly Lagoon walk while its western end links to, and partly duplicates, the Harbour Bridge to Manly via Spit walk.

This brochure covers walking routes from Sydney Harbour Bridge via the Spit Bridge and on to Manly. At its southern end it connects with the Harbour Circle and Harbour to South Head and Clovelly walk. Its northerly section links and partly duplicates the Manly Lagoon to North Head and the Spit walk.

The main route covers the southern shores of Sydney Harbour through scenic waterside parkland and urban landscapes resonating with history and interesting architecture. At charming Watsons Bay it meets the dramatic entrance to Sydney Harbour. It then swings south past the notorious Gap and 80m ocean cliffs before dropping down to iconic Bondi Beach and the succession of eastern beaches to Clovelly. Sites of interest along the way include Macquarie Lighthouse, two historic cemeteries, waterfront parkland, interesting architecture and continuously wonderful scenery.

This brochure covers walking routes from Clovelly to Cronulla. At Clovelly it connects with the Harbour Bridge to South Head and Clovelly walk. Its southern end is the termination of this walking network but connects, via the Bundeena Ferry, with the coastal walk south through Royal National Park. Part of the link walk around the north western side of Botany Bay is covered by the Cook Park Trail.

The main route generally follows the route of the Federation Track along Sydney’s Eastern Beaches to La Perouse on Botany Bay. Beaches and cliffs, National Park, golf courses, historic military and other sites, a shipwreck, museums, a historic cemetery, important Aboriginal sites and land especially at historic La Perouse, characterise this northern part of the walk.

From Kurnell, at Cook’s Landing Place, the route passes through more of Botany Bay National Park with cliffs and wide ocean views, delightful coast flora, sandhills and Cape Baily Lighthouse, before leaving the National Park at Boat Harbour to follow the long sandhill-backed Wanda and Cronulla Beaches to Cronulla itself.

At present, there is no permanent ferry link between La Perouse and Kurnell. A long walk around Botany Bay is possible, and the Cook Park Trail is one attractive section, but much of the remainder is best done at the moment via public transport.

* Please note – this map does not reflect recent changes made to the walking route between Little Bay and La Perouse due to the opening of Malabar Headlands National Park.

The main route is a 60km, four-day walk, but it can easily be broken up into many short walks. Observatory Hill near the Harbour Bridge displays the circle’s westward vista of bays and waterways. Big bridges feature strongly, with seven major crossings. Highlights include north shore bays and bushland; urban and historic architecture, recycled industrial landscapes, former Callan Park asylum, Darling Harbour and the cottages and pubs of Millers Point. The northern and southern halves are roughly equal in length with the north often on undulating park and bush tracks, while the south tends toward flatter streets or parks.

This brochure covers walking routes between two bridges on both sides of the Parramatta River, and traverses a number of significant bays, parks and historic sites, and includes the magnificent Concord Foreshore Trail between Majors Bay and Brays Bay and the moving Kokoda Track Memorial.

Other features of interest include the former Walker Family estate buildings Yaralla and Rivendell, historic Gladesville Hospital, Sydney’s last car ferry Mortlake to Putney , several former industrial sites, waterfront parkland, and a historic rail bridge now converted for bike and pedestrian use. At its eastern end the brochure connects with the Harbour Circle Walk while its western end links with the Parramatta River Walk – Ryde Bridge to Parramatta.

The route includes a fascinating walk through the picnic grounds and mangrove walkways of Bicentennial Park; edges the remarkable recovered landscape and built environment of Sydney Olympic Park, including its extraordinary Brickpit Ring. The walk crosses the river twice as it continues along the riverbank of the Parramatta river through Parramatta CBD before entering the world heritage listed Parramatta Park. A track opened in 2011 leads to the western end of this walking network and the historic camp site at the head of the River reached by Governor Arthur Phillip in April 1788.