You are here: Home / Uncategorised / Is your Site Right? 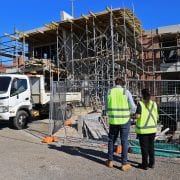 With higher than average rainfall predicted for Sydney and surrounding regions throughout the remainder of 2020, builders and home renovators are urged to get their sites right to avoid needless pollution of local waterways.

Forecasts from the Australian Government Bureau of Meteorology show a high chance of La Niña developing in the coming months, as well as a positive Southern Annular Mode, which will bring wetter than average conditions across much of eastern Australia, particularly during October.[1]

To prepare for the spring and summer rainfall surge, councils, the NSW Environment Protection Authority (EPA) and the Department of Planning, Industry and Environment (DPIE) will be conducting a one-day inspection blitz of building sites across Sydney and the Hunter Coast on Wednesday, 21 October, as part of the Get the Site Right campaign.

The campaign encourages developers, builders and home renovators to implement erosion and sediment controls to prevent sediment runoff from being washed or blown off their sites into stormwater drains and out to local creeks and rivers.

The one-day blitz aims to build on the results of the month-long Get the Site Right campaign in May 2020 which showed a 10 per cent improvement in compliance rates from the previous year.

EPA Director Regulatory Operations Metropolitan, Giselle Howard, said sediment runoff has a significant impact on the environment and can be costly for builders and developers.

“Large building sites can lose up to four truckloads of soil in one storm if not properly contained,” Ms Howard said.

“This is a considerable waste of building material and money which is literally going down the drain – and can also expose builders and developers to significant fines for poor site compliance.

“The impact of sediment runoff on the environment is considerably higher, harming precious aquatic life and eroding creeks and riverbanks, and also damaging stormwater infrastructure which can be expensive to repair.”

Members of the public who may be out exercising near our waterways are encouraged to report pollution incidents, including poor sediment control, to their local council or the EPA’s 24/7 Environment Line on 131 555.