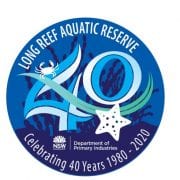 The State’s first aquatic reserve is celebrating its 40th anniversary, as a pivotal resource for marine education for all!

The area was protected for educational and scientific purposes, frequented by thousands of school children, university students and the public visiting the aquatic reserve each year to learn about intertidal animals and plants. It has also been a scientific research site for universities and the Australian Museum for over 70 years.